TQM provided consultancy services to Water Supplies Department (WSD), helping WSD being the first government department in Hong Kong to have received ISO 50001:2011 Energy Management Certification. To celebrate achieving the certificate and commissioning of the saltwater supply system for northwest new territories, WSD held a ceremony at Lok On Pai Salt Water Pumping Station on 21 this month. Mr Paul CHAN, the Secretary for Development, attended the ceremony and gave a speech. Dr TONG, President of GATE, and Dr Patricia CHEUNG also attended this ceremony at the invitation of Mr Enoch Lam Tin Sing, director of WSD.

Mr Enoch LAM said at the beginning of the ceremony that the commissioning of the saltwater supply system for Northwest New Territories enables around 700,000 residents in Tuen Mun East, Yuen Long and Tin Shui Wai to use salt water for flushing soon, marking an extension of Hong Kong’s seawater supply coverage to 85 per cent. He added that WSD will further study the expansion of its seawater flushing system in a cost-effective manner, with Tung Chung as the next target area. WSD which has been awarded the International Organization for Standardisation (ISO) 50001 certification for energy management systems, is the first government department in Hong Kong to have received the certificate, demonstrating the achievement of a higher standard in energy management by the department. However, WSD is also a government department with the largest consumption of water and electricity in Hong Kong. The ISO 50001 certification has not only helped improve the energy management system, further taking forward the department’s initiative of enhancing the energy performance of its waterworks but also sets an example for other departments and organisations to follow, thereby promoting the enhancement of energy efficiency levels to all sectors.

Mr Paul CHAN, the Secretary for Development, said that groundwater is not abundant in Hong Kong, while saltwater is particularly rich. Using saltwater for flushing on such a scale makes Hong Kong one-of-a-kind in this field. Not only is freshwater resource saved, but electricity consumption also will be reduced. To further improve its energy management, WSD applied all its facilities for ISO 50001:2011 certification. Its efforts in energy management contribute to reducing electricity consumption and greenhouse gas emissions and building up a culture of energy-saving and emission-reduction across the government departments. 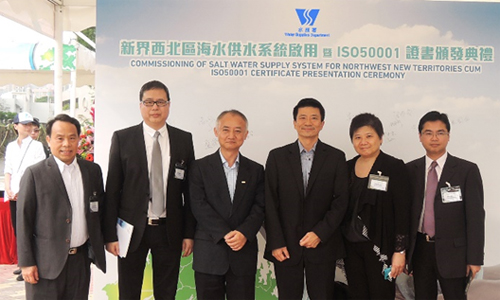 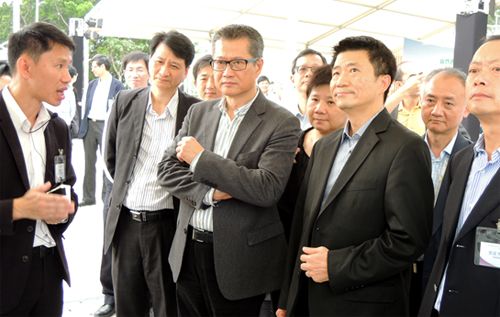